A house for an artist couple

At the age of 16, Paul Cauchie started to study architecture in Antwerp. In 1893, he enrolled at the Brussels Royal Academy of Fine Arts. From 1893-1898, he studied painting (class taught by Constant Montald), the sgraffito technique, and decorative painting. He won several prizes and in 1899 he was awarded a travel grant which enabled him to travel to Italy. 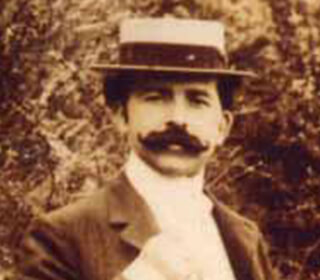 They married in 1905, and in that same year they decided to build a house on the six metre wide plot of land which Paul had bought at the upper end of the rue des Francs, i.e. at close proximity to the Cinquantenaire Park and in clear view of all the neighbouring roads. He designed the front of the house like a giant advertising billboard. It drew the attention of passers-by and demonstrated his know-how. This was done with the intention of advertising and selling his work.

The new owners undertook restoration works lasting fifteen years. However, the intended use of setting up a Tintin museum, which was a project that had been approved by author Hergé, was later abandoned in favour of what was later to become the “Belgian Strip Cartoon Centre”, located in the former Waucquez stores designed by Victor Horta. However, an in-depth feasibility study had however been conducted in conjunction with the Hergé Studios and architects Jean-Jacques Boucau and Xavier de Pierpont. The preserved model built to scale by the Hergé Studios and the various sketches of scenography designed by Bob De Moor still bear witness to this aborted project. 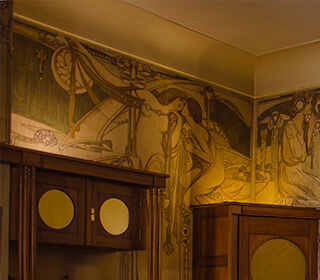 Another use was then decided upon, and since 1994, the main rooms and the cellars, which were transformed into a gallery, are now open to the general public. 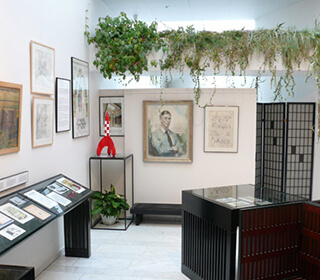 The first week-end of every month

Reservation is mandatory at

Renting Topical evenings, cocktails, seminars, etc. can be organised in the gallery area and « exceptional dinners » in the ground floor rooms. Please contact us for information regarding terms and conditions and the number of people permitted, depending on the type of event
More infos